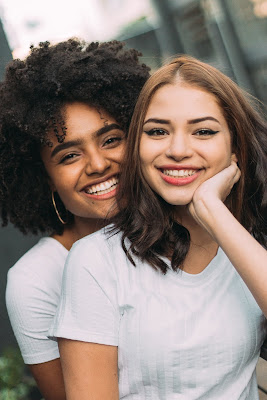 
The other day I got into a conversation with other women at work about relationships. The topic went into so many directions. There were secrets revealed, tears shed, and at the end we realized that we were all vulnerable to love.

One woman shared that she had been married for 17 years and her husband was loyal to her for only 4 years. That she allowed her spouse to come in and out of her life even when they divorced, hoping he would come back and wanting to be a family for her kids. She finally met another man, falls in love, and recently married him after she allowed herself to be loved. Her kids say they never saw her smile while she was with their father. They see what love now looks like.

It resonates with another woman sitting on the other side of the table. Her parents were married but her mother was verbally and physically abusive to her father so they divorced.  Their divorced impacted from the child respective. The point of being divorced but letting the spouse back in, sharing the same bed, and the confusion when rejected.  She felt that she wasn’t good enough when she became an adult to be in a relationship!  There was something that I had mentioned that when someone is broken that they can’t expect to be married and have their spouse make them whole. She said she had to work on herself because she was broken!

How many of you feel that you are broken? How many have a list of everything specific that you are looking for in a relationship? Does the person have to be equally yoked? Do they have to be a certain age?  Have to make a certain amount of money? Will you let others tell you what you should have in a mate or know for yourself?

My feeling is to be organic with it. Meaning don’t go looking because if it’s meant to be it will find you.  Be comfortable within your own skin. The pet peeve that I have is women scared to be alone that they accept treatment from a man that doesn’t deserve  a queen just to have the initial MRS. in front of their names.

I think what impacted myself is being a daughter of a woman who was a survivor. It helped me to overcome my own insecurities, to set goals for what I want in a relationship, and to let down the ice cold wall that protected my heart so that I can experience love.

About Patricia A. Saunders
Award winning author, poet, speaker Patricia A. Saunders was born and raised in Connecticut before relocating to the San Francisco Bay Area nearly 26 years ago. She received her Master’s in Management from the University of Phoenix in 2011. After the passing of her mother who had Alzheimer’s, Patricia decided if she inherited the disease she wanted her words to be her legacy and that all the words that she kept to herself were to be released.

Her fifth book was released by Book Baby Publishing (2017) There Is Sunshine After The Rain a non-fiction novel that includes poetry is birthed after the tenth anniversary of her Mother’s passing, the reality that with every lesson that she has experienced through life that there is a reason, there are tests that all are faced with, but it’s how you respond.

Saunders chose poetry and nonfiction to let the readers know the thought process behind the poetry, tools to help others who may face the same circumstances, and it builds a relationship further between the author and those reading her words.