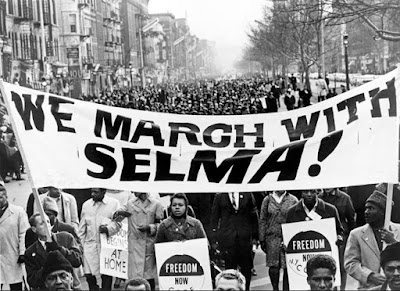 Seeing the movie Selma made me realize that racism is something that all people have to deal with in one form of another. A few weeks ago, we talked about the Racial Lens. The racial problem is a human condition and it affects everybody in a different way.  I have Cerebral Palsy. I can walk and talk, but people have a hard time understanding me. There are others who have cerebral palsy and are affected differently.

When Selma made the national news, Dr. King saw the nation needed to be involved in movement. Now movies like Selma tend to make-up minor details, but I know the story of Viola Liuzzo from Detroit who came to help and never went home.

The worst injured from the movement in Selma was James Reeb, a white Unitarian Universalist minister from Boston. Selma’s public hospital refused to treat Rev. Reeb, who had to be taken to Birmingham’s University Hospital which was two hours away. Reeb died on Thursday, March 11 at University Hospital, with his wife by his side. It is extremely important to realize that racism is a human problem.


About the Author
Lydia E. Brew was born with cerebral palsy but has not allowed her physical limitations to stand in her way. Her writing provides insights into the world of the physically challenged. She graduated from Texas Southern University where she received The Society of Professional Journalist Sigma Chi Citation for Achievement.  She was a member of the drama club and pledged Alpha0 Kappa Alpha Sorority, Incorporated.  Under the leadership of one of her journalism professors, Miss Brew penned her first book Edith, The Story of Edith Irby Jones, M.D. about the first African-American to graduate from The Arkansas School of Medicine.  Upon finishing college, Miss Brew worked with the Houston Association of Black Journalists. She is a Christian and attends St. Stevens United Methodist Church.

Miss Brew founded Lydia’s Educational and Charitable Organization (LECO) when she decided to encourage young people to write.  LECO did this by sponsoring a yearly contest in which the contestant had to write about positive role models who were alive and from the Houston area. Each student who wrote an eligible essay was given a certificate of participation.  Winning writers received cash prizes.

Her second book titled Our Learn Together Book is a book for young readers based on the biography of Dr. Jones. It tells her story in a simplified format on one page and allows the reader to write their own biography on the other. There are activities in the back where younger children can learn developmental skills and older children can learn to do research.