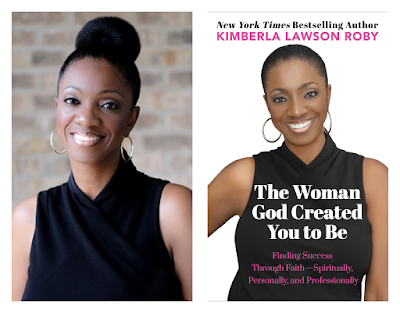 About the Author
New York Times Bestselling Author & Speaker, Kimberla Lawson Roby, has published 28 books which include her faith-based, nonfiction title, THE WOMAN GOD CREATED YOU TO BE: Finding Success Through Faith—Spiritually, Personally, and Professionally, as well as her novels, such as BETTER LATE THAN NEVER, SIN OF A WOMAN, A SINFUL CALLING, BEST FRIENDS FOREVER, THE ULTIMATE BETRAYAL, A CHRISTMAS PRAYER, THE PRODIGAL SON, THE PERFECT MARRIAGE, THE REVEREND’S WIFE, BE CAREFUL WHAT YOU PRAY FOR, SIN NO MORE, CASTING THE FIRST STONE, and her debut title, BEHIND CLOSED DOORS, which was originally self-published through her own company, Lenox Press.

Kimberla has sold nearly 3 Million copies of her books, and they have frequented numerous bestseller lists, including The New York Times, USA Today, The Washington Post, Publishers Weekly, Essence, Upscale, Black Christian News, AALBC.com, Barnes and Noble, Amazon.com, Wal-Mart, The Dallas Morning News, The Austin Chronicle and many others.

Over the years, Kimberla has spoken to thousands of women at conferences, churches, expos, workshops, luncheons, libraries, colleges, universities and bookstores. She shares her own personal journey straight from her heart and has a strong passion toward helping women become all that God created them to be.

Kimberla resides in Illinois with her husband, Will.  Website: https://kimroby.com/events

To share your thoughts with Kimberla regarding her work, please e-mail her at: kim@kimroby.com.

If you would like to schedule a speaking engagement, booksigning event, or media interview with Mrs. Roby, please contact her by email at publicity@kimroby.com

The Woman God Created You to Be: Finding Success Through Faith—Spiritually, Personally, and Professionally by Kimberla Lawson Roby

ARE YOU THE REAL WOMAN GOD CREATED YOU TO BE?

HAVE YOU WANTED TO BECOME HER—SPIRITUALLY, PERSONALLY, and PROFESSIONALLY?

Kimberla Lawson Roby admits that for years, she wasn’t being the real woman God created her to be. Yes, she has always loved God and tried her best to honor Him, but what she eventually discovered was that building and maintaining her own personal relationship with God—and making Him her top priority—was the key to finding joy in all areas of her life.

Now, in The Woman God Created You to Be, Kimberla has bravely—and transparently—written about her flaws, fears, and failures, as well as her faith, courage, and successes.

From experiencing divorce to marrying her soulmate of twenty-nine years…from hopelessly searching for the perfect job to becoming a New York Times bestselling author…from suffering in silence with anxiety to concentrating on self-care…from struggling with the loss of her mom to finding strength, comfort, peace. and understanding—Kimberla takes you on a journey that will help you do the following:

Kimberla reminds us that when we trust and depend on God—heart, mind, and soul—He will empower us to do more than we ever thought imaginable. He will help us see that we are more than enough, and that He has already given us everything we need to become the women He created us to be—spiritually, personally, professionally…and beyond.