Don't Judge My First Chapter - Connecting with Your Destiny by Joylynn M. Ross 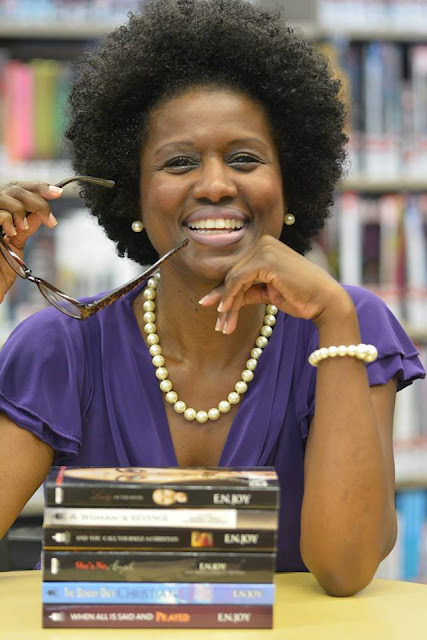 My life just completely changed. I always say that the greatest  "Ah Ha" moment a person could ever have is when their life begins to make sense. I live, breathe, see, hear, eat, sleep, think, taste, feel, smell the written word. It is my life. I've made bestsellers lists, won awards, appeared in magazines, had books translated to different languages, put on audio and more, but I was always yearning/desiring/chasing more.  I can’t put my finger on one specific thing.

Perhaps I was longing for more notoriety, money or what have you. I achieved things that I am most proud of and that other authors have yet to accomplish. But nothing was filling on a long-term basis. Nothing made me feel like I knew what my purpose in this writing thing was. I just knew that it took up all of my time and all of my money, and in most cases, with a very small financial return.

Of course the wonderful feeling of gratitude I receive from readers is priceless.  I love love love my readers, their testimonies, support and reviews. They are the boss of me. They give me a high, but then eventually I find myself back in that space again where I'm seeking, not just an answer, but a feeling; that feeling of everything making sense.

"Why am I doing this outside of the fact that I love writing so much?" "Is this what I'm called to be doing or only what I want to be doing?” “Is there something else I should be doing instead?" "Why?" "Why not?"

One time I was at a literary event and at times I felt inferior to some of the National Bestselling authors that occupied the room. Their literary reputations preceded them. Everyone in the room seemed to know who they were and acknowledged them with huge applause. I reflected back on that moment and said in prayer, “God, I want to know what it feels like to enter people's presence and everyone in the room already knows who I am." His reply to me was, "Me too."

It was then I had my greatest “Ah Ha” moment. My ministry is delivering God's message through the written word in the form of literary entertainment in order to point the world in the direction of the kingdom. In doing so I FINALLY realized that E.N. Joy's job is not to make herself famous, but to make God famous. In spite of what some may think, not everybody knows God. Even God Himself knows that; He told me so!

I feel so free now knowing that even though my husband, children and so many family members, friends, readers and strangers have supported me in my literary endeavors, that  I don’t have to prove to them that their love and support and bragging about me was not in vain by becoming the most famed and richest author in the world.

I don't have to make the New York Times, my books don't have to be turned into Lifetime movies or chosen as Oprah's book of the month. My job is not to become a famous author through my writing, but to make God famous through my writing. So no longer is my motivation to become Bestselling Author E.N. Joy-One Million Copies Sold, but instead: BLESSEDselling Author E.N. Joy-One Million Souls Saved!


About the Author
Joylynn M. Ross, writing as BLESSEDselling author E.N. Joy, is the author behind the "New Day Divas," "Still Divas," "Always Divas" and "Forever Divas" series, all which have been coined "Soap Operas in Print."

She is an Essence Magazine Bestselling Author who wrote secular books under the names Joylynn M. Jossel and JOY. Her title, If I Ruled the World, earned her a book blurb from Grammy Award-Winning Artist, Erykah Badu.

Her Urban Fiction title, Dollar Bill (Triple Crown Publications), appeared in Newsweek and has been translated to Japanese. After thirteen years of being a paralegal in the insurance industry, E. N. Joy divorced her career and married her mistress and her passion; writing.

In 2000, she formed her own publishing company where she published her books until landing a book deal with St. Martin's Press. This award winning author has been sharing her literary expertise on conference panels in her home town of Columbus, Ohio as well as cities across the country. She also conducts publishing/writing workshops for aspiring writers.

Her children's book titled The Secret Olivia Told Me, written under the name N. Joy, received a Coretta Scott King Honor from the American Library Association. The book was also acquired by Scholastic Books and has sold almost 100,000 copies. Elementary and middle school children have fallen in love with reading and creative writing as a result of the readings and workshops E.N. Joy instructs in schools nationwide.

In addition, she is the artistic developer for a young girl group named DJHK Gurls. She pens original songs, drama skits and monologues for the group that deal with messages that affect today's youth, such as bullying.

Joylynn M. Ross is the Creator of the "Act Like an Author, Think Like a Business" Conference: https://www.pathtopublishing.com

When All is Said and Prayed by E.N. Joy
Listen to the author reading:  http://www.audioacrobat.com/note/C8866zRx

You Get What You Pray For by E.N. Joy
Listen to the author reading:  http://www.audioacrobat.com/note/CCvHPdYx

More Than I Can Bear by E.N. Joy
Listen to the author's reading:  http://www.audioacrobat.com/note/ClGT9Vdx