IN THE BELLY OF THE BEAST: A WOMAN TRAPPED INSIDE THE U.S JUDICIAL PRISON SYSTEM

IN THE BELLY OF THE BEAST: A WOMAN TRAPPED
INSIDE THE U.S JUDICIAL PRISON SYSTEM
Written by Jamila T. Davis 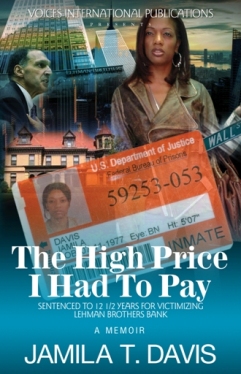 As a child, I stood proudly with my right hand plastered over my chest, staring in admiration at the American flag, as I recited the Pledge of Allegiance. It didn't bother me that I was the only African-American child in my fifth grade class. Instructed by a female, Caucasian teacher and surrounded by students of diverse cultures and backgrounds, I was taught that we all were equal. We had one powerful common denominator that outweighed all of our differences, which I took pride in- we were all Americans!

I zealously recited the words, "one nation, under God, indivisible with liberty and justice for all."
I believed that meant no matter my race, creed, or gender, I was afforded liberty, equality and justice. I had no idea as an African American female I would be subjected to major discrimination not only because of my race, but also because of my gender. Even more shocking, I had no idea that the prejudice I would face would take place in the U.S judicial system.

On July 16, 2008 I was sentenced to 12½ years in federal prison for bank fraud. I was accused of being the 25 year old mastermind that devised an elaborate scheme to victimize the now defunct Lehman Brothers Bank. From the beginning I admitted my role in the scheme. However, I argued that the bank's own employees directed the loan applications and instructed us to what was needed to insure that each applicant met the bank's lending criteria. Without the assistance of Lehman's employees and affiliates the loans in my case would have never been approved. My claims were quickly rejected and Lehman attorneys (who turned us over to the feds after the company's own fraudulent dealings were threatened to be exposed) were taken at their word. As a result, not one Lehman employee was investigated or questioned in my case. Instead, I was presumed to be the mastermind.

In the federal system, according to the U.S Sentencing Guidelines, sentences in white collar cases are imposed largely based on loss amount. The larger the loss amount, the lengthier the sentence. In 2002, before the biggest real estate boom in recent history, my company, through business partners, acquired 9 properties in Alpine and Saddle River, New Jersey, with funding from Lehman. The goal of the plan was to buy houses in these upscale areas, fix them up and resell them for a profit to wealthy clients. We spent millions of dollars in renovations and were in the process of selling the properties when we were turned over to the feds by Lehman attorneys. From the onset, the bank's attorneys had their eyes on the prime real estate in my case, which was valued at over 26 million dollars by the end of 2003.
Instead of conducting a public auction or bidding on the properties, the bank's attorney, Jeffrey Greenbaum, turned down full price offers and sold the properties to a vested investor in Lehman, Chris Lipka, for a substantial discount. As a result, the bank created a 12 million dollar loss amount. My sentence was calculated based on this inflated loss amount. Consequently, I was given a guideline sentence of 151 months. A few months later, before the same judge, the white, middle ages lawyer and mortgage broker, who were both seasoned veterans in the banking industry, and who utilized their licenses to process and close the deals, received a 24 month sentence each. In a just society, how could it ever be justified that my sentence should be more than six times greater than theirs? Where is the justice in that?

Just 59 days after I was sentenced, Lehman Brothers Bank collapsed. The bank's bankruptcy findings concluded that the corporate policies of the bank were premised on funding fraudulent mortgage loans. The bank was caught red-handed in the conduct I alleged their employees were involved in years before the bank's collapse. I thought it should be fairly easy to use this newly discovered evidence to overturn my lengthy sentence. Clearly, it could now be seen that I wasn't the "mastermind." It didn't matter. Once you are trapped in the belly of the beast of the "justice system" it is very difficult to get out!

Despite the fact that my case contained blatant constitutional violations, my pro se filings were quickly dismissed. I wondered if they were even looked at, especially after reading about Jerrold Peterson, the former court clerk in the 5th Circuit Court of Appeal in New Orleans, Louisiana. Before killing himself, Peterson left a lengthy suicide note stating he could no longer deal with the guilt, after following judges' orders for nearly 13 years to procedurally deny, without any review, every federal appeal filed by federal inmates who proceeded without attorney representation. Unfortunately, this kind of injustice is common throughout the U.S judicial system, especially amongst those who can not afford representation. Yet, it is often swept under the rug and not publicized. Witnessing the hardships of other women whom I was imprisoned with who faced the same challenges within the judicial system, I realized I was not alone in my struggles.

Although American democracy was created on the principles of equality and justice, in 2013 women such as myself, are serving stiffer sentences than our male colleagues for financial crimes. While white males, who are corporate executives and businessman, receive a slap on the wrist or no punishment at all for their wrongdoings, women of all creeds and backgrounds are being sentenced to lengthy terms of imprisonment for the same crimes. Stripped from society and taken away from our families and children, we have been left without a voice. Contrary to popular belief, most us us are nonviolent offenders who pose no threat to society. We are humans who made some bad decisions and poor judgments which led to our imprisonment. We are not hardened criminals that have no chance on being rehabilitated.

While not one executive banker has been held responsible for the events that led to the 2008 financial crisis, women like myself, have been left to serve big time! We are liken to Prisoners Of War that have been taken captive. Yet the only problem is we are American citizens. Many may overlook our struggles believing that our problems will not affect their own lives. The truth is the epidemic of the rising rate of women in prison in our country effects our entire society. Trapped away in prison, our children are left to be raised without mothers. Not only are we serving time, so are our families. Without proper guidance and direction many of our innocent children will also be led astray and become vulnerable to criminal behavior. If this destructive cycle is not broken, it will continue. And, the results will be harsh on our entire society.

Unlike the state system, federal prisoners have no recourse. We don't have a parole system, and we are mandated to serve 85% of our sentence. When you have any system that is run by humans, mistakes and misjudgments are bound to occur. Without any form of parole, or the ability of our prison overseers to recommend release for those they feel have been rehabilitated, we are stuck in the belly of the beast. We are held bound in a prison system that is overcrowded and lacks the financial budget needed to provide enough effective programs to deter recidivism.

Despite the errors in my case, I must serve 10½ years on my 12½ year sentence, which will cost tax payers approximately $400,000. Instead of paying my debt back to society, society is paying my debt through the hefty cost of my incarceration. Through prison reform, which includes effective alternatives to incarceration for women, this problem could be turned around. And, the imprisonment cost to tax payers could be significantly reduced. At the same time, female offenders would be awarded a chance to pay their way forward as they rehabilitate.

There is no one in our society who is perfect. We have all fallen short in one way or another. Mercy and compassion heals and restores. They are the key ingredients of justice. Don't just lock us up and throw away the key. Please provide us with the resources we need to change. Our successful rehabilitation effects society as a whole.

Most importantly, help to ensure that we are treated fairly and that our constitutional right to equal protection is upheld. As Americans, we all should be treated equally. Setting double standards for men and women negates the principles that our country was built on and it sends the wrong message that some of us are "too big" to be punished.

Please lend female prisoners throughout the country your helping hand. Your voice as an American citizen can make a difference!  WE NEED YOU!