But With Power by Natasha Frazier

But With Power by Natasha Frazier 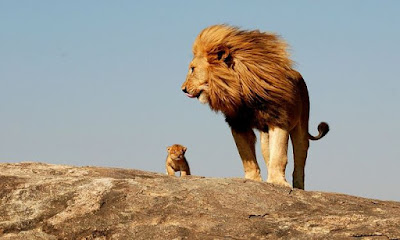 I have watched the movie, "The Lion King" at least 365 times. When my baby sister was about 2, she wanted to watch it every day and we did. Now that I am an adult with my own children, I have watched it a few times with them as well.  "The Lion King" is a very powerful movie with quite a few life lessons in it.


As a young cub, Simba was excited to become king! In fact, he sang about it and talked about it quite a bit. It was his destiny. He was born to become the next king and he knew this. As life happened and he grew older, Simba lost sight of who he was and who he was destined to be. He started to live as though he had no purpose because of something terrible that happened and discouraged him.


When Simba's new found friends, Timon and Pumbaa eventually learned that Simba was supposed to be king, their attitudes changed. Pumbaa started graveling at Simba’s feet and Timon said, "Wait, he's not the king! Are you?" Simba then commented that he was going to be but that was a long time ago. He told them that they didn't have to treat him differently because he was still the same person. Timon said, "Yes, but with power!" I love that part of the movie! It reminds me of us as God's children. When we accept Christ as our savior, we are still the same people but with the power of the Holy Spirit on the inside of us.  Don't take this lightly; you were created for purpose. Do not allow past circumstances to discourage you. If you have, it is time to reclaim the power that you have been given by the Holy Spirit.


Prayer for Today: Heavenly Father, thank You for the power that You have given me through Your Holy Spirit. Help me not to lose sight of it and to always walk in Your strength and mighty power. In Jesus’ name, Amen.


Meet the Author
Natasha Frazier has penned a Readers' Choice award-winning devotional, The Life Your Spirit Craves. The Life Your Spirit Craves is a 30-Day devotional and journal that encourages readers to seek, accept and pursue their God-given assignment.. Her second book, Not Without You: 365 Days in the Lord’s Presence encourages readers to make devotion a part of their everyday life by seeking God every day. Not Without You has been nominated for the Henri Award. The Henri Award recognizes excellence in Christian literature. Her debut fiction novel, Love, Lies & Consequences has also been nominated for the Henri Award.