The Reality Check A Short Story by Marian L. Thomas

The Reality Check
A Short Story by Marian L. Thomas 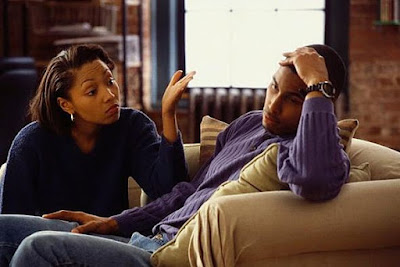 Jenna walked into the room with a frown on her face. Her countenance was full of worry and her eyes began to push forward the tears that had been building up within her for the past few days. She sat down on the worn-out brown sofa and let out a sigh that the whole house (if the walls were listening) could hear.

Chris didn’t look up from his morning paper. He kept his eyes focused on the words of a reporter’s column although he honestly knew he cared less about the actual content. He needed something other than the obvious gloom in the air to keep his attention.

Jenna looked across the room at her husband; she noticed his obvious attempt to ignore the situation and that fueled the anger that was just at the stage of boiling over. He kept nodding his head slowly, pretending as if he were really engaged in the story. She wanted to scream at him but she sat there in silence. Silence had become part of the family it seemed for the past month. She remembered when she opened the door and found it on her door-step with packed bags, ready to move in for what appeared to be longer than she cared for. She hated silence. It was like a bug that no matter how many times one hit at it, it always managed to get away and annoy the mess out of you. She sighed again. Louder.

Chris turned to the next page and immersed himself into another story.

Jenna stood up and walked over to the window and pulled back the curtain to allow the sun to ease the anger inside of her. It was raining outside. The corners of her eyes began to shake uncontrollably and tiny tear drops began to slide down the center of her cheeks. She turned and looked at him, wanting him to see the pain he was trying so hard to ignore.

Chris raised the paper slightly higher than before. He knew this might be taking the moment to another level, pushing the envelope too far. He could feel her stare and knew that at this moment the tears were streaming down her face. What could he say to her to ease the pain? There was nothing.

They both had known this moment would be upon them. They had fought hard to avoid it, even tried to avoid each other.   He heard her footsteps getting closer to him. His body began to tense. She reached out, hands shaking. Emotions uncontrolled and grabbed the paper. The ripping sound was astonishing. The effects lay upon the floor, pieces here and there. She walked out of their living room and headed up the stairs. He knew what was coming next. The slamming sound the door made caused him to shift his position in his chair.

He put down the paper and leaned back. He found himself staring at the ceiling fighting off his own tears. Men don’t cry, he told himself.  He knew it was time to break the cords of silence that had been choking their relationship for the past month. If she only knew how her pain cut to the core of his heart, she would understand why he just couldn’t look at her.

He eased himself out of the chair and as he stood up he looked at the stairs that led to the upper level of their home. He knew she would be a mess. He knew she had every right to be. The situation was neither of their faults. He wiped the tears away making sure there were no traces and began what would be even a more painful moment for them. He had to tell her that it was time to face reality, together.   As he reached the top of the stairs he stopped and stood there for a moment, listening for any sounds that she might have calmed down. Nothing.

Placing his hand upon the knob of their bedroom door, he turned it ever slowly until he knew that in a moment he would be standing in their room and she would be waiting for him to do what he should have done a month ago. Be a man.   He saw her lying across the bed with her face buried in a pillow. He didn’t hear the slight hint of tears still flowing so he went over and slipped into the bed next to her. He reached out and slowly placed his arm around her waist and pulled himself close. His voice a whisper but he knew she was listening.

“We might lose the house, but we still have each other. We will get through this together. I know it hurts, I understand it’s painful but the reality of the situation calls for us to look at other options. Know that I love you and that I will always be here, house, furniture or not.”

Jenna took a deep breath, finally she felt like the sun was shining.

About the Author
Award-winning novelist, Marian L. Thomas is a dynamic story-teller with five engaging and dramatic novels to her credit. Her books have been seen on national television stations such as, the Oprah Winfrey Network, Ovation and the A&E Network. She has been featured in print magazines, newspapers and a guest on many broadcast and online radio stations. Her titles, “My Father’s Colors” and “Strings of Color”, both received the USA Best Book Finalist Award. Each of her books have reached a bestseller position on Amazon.com for their respective categories and have placed on the bestseller’s list for Barnes & Noble.com, as well.

“My children’s book comes from my heart. My life. My husband and I lost our dog, Winston in 2013 after 14.5 years. Writing this book continues to help with the healing process,” stated Mrs.  Thomas.