Welcome to My Breakdown: A Memoir by Benilde Little 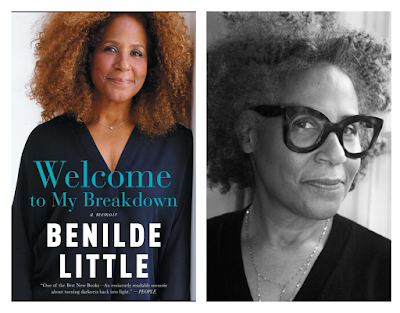 The nationally bestselling author of Good Hair and The Itch pens her first book of nonfiction, a “momoir” about her own journey caring for aging parents, raising children, being married, plunging to the depths of depression, and climbing her way out.

A major bestselling novelist and former magazine editor, long married to a handsome and successful stockbroker with whom she has a beautiful daughter and son, Benilde Little once had every reason to feel on top of the world. But as illness, the aging of her parents, and other hurdles interrupted her seemingly perfect life, she took a tailspin into a pit of clinical depression.

Told in her own fearless and wise voice, Welcome to My Breakdown chronicles a cavern of depression so dark that Benilde didn’t know if she’d ever recover from what David Foster Wallace called “a nausea of the soul.” She discusses everything from her Newark upbringing, once-frequent visits to a Muslim mosque, and how it felt to date a married man, to her doubts about marriage, being caught between elder care and childcare, and ultimately how she treated her depression and found a way out.

Writing in the courageous tradition of great female storytellers such as Joan Didion, Nora Ephron, and Pearl Cleage, Benilde doesn’t hold back as she shares insights, inspiration, and intimate details of her life. Powerful, relatable, and ultimately redemptive, Welcome to My Breakdown is a remarkable memoir about the power within us all to rise from despair and to feel hope and joy again.

Prologue from Welcome to My Breakdown

MY MOTHER was gone. I never thought I would survive her death.

I was, in so many ways, her creation. She literally spoke me into being. When she was pregnant with me, she told everyone she was having a girl, and they believed her. This was 1958, when she was in her thirties, and no one had even heard of amniocentesis. Her friends at her job at St. Michael’s Medical Center decorated the nurses’ lounge in pink, and all the baby presents were pink: the jumpers, booties, coats, and hats. “I told that doctor, ‘If it’s a boy, don’t even bring him to me,’?” she used to tell me. She had already birthed three sons and was ready to welcome her daughter.

After I arrived, she went to work designing her girl. I would have everything she thought her cherished daughter should have. I took piano and ballet lessons, and wore well-made white shirts with Peter Pan collars and wool plaid jumpers and skirts. I even wore a camel hair coat to my elementary school, which was right across the street from our house, close enough for my mother to watch over me. I was an introspective child, quick to cry, more at ease with my books and dolls than with the rough-and-tumble of the playground. As tough and no-nonsense as my mother could be, she had breathed into me not just life but also the gift of sensitivity. I felt everything too deeply. The gift would become my burden.


For the two years before my mother died, I had been in a midlife malaise made worse by the arrival of menopause and the unrelenting routine of ferrying school-age children while caring for my aging parents. When my mother stopped breathing, I fell deep into a cavern of grief. I missed her with an ache that bore into every cell of my body. I couldn’t get out of bed, other than to wake my daughter up for eighth grade, drive my son, a second grader, to school, and slug through walking Charlie, my constant companion in the form of a bichon-poodle mix. My entire body hurt, yet I was numb. When my family came home in the evening, I’d move from my bed to the sectional in the basement and watch TV. It didn’t matter what was on. I simply wanted the noise.

I had expected to feel grief for the first several months, but then seven months passed, eight, a year, and I still couldn’t lift myself out of the pervasive sadness. I didn’t know what to do. When I climbed into bed at night, this feeling, this “nausea of the soul,” as the writer David Foster Wallace described it, clung to me along with my pajamas and woke up in the night before I did. It greeted me as I opened my eyes at two, three, four in the morning, and I would turn to look at my husband, Cliff, lying on the pillow next to mine.

Feeling me stir, Cliff would open his eyes.

“You’re going to have to put me away,” I would tell him every morning and every night. “I can’t keep going like this.”

Cliff had lost his father to cancer only two months before my mom died, and he was still wrestling with his own grief, but he pushed it away to try and help me deal with mine.

I made an appointment with a therapist provided by the hospice that had helped care for my mother during her final days. This couldn’t be normal grief, I told the grad student sitting in for the psychologist, who’d had an emergency and didn’t show. The student was empathetic but ineffectual. I was so swamped by sorrow at that point, it’s possible no one could have reached me. I remembered how Cliff had cried when we got the news about his dad; how he had comforted his mom and helped plan a beautiful memorial service and then eventually went back to work. He was sad, for sure; he had worshipped his dad, but he had remained himself as he dealt with everything, even maintaining his outrageous sense of humor.

I, on the other hand, was most definitely not myself.

Whenever I talked about my needing to be institutionalized, Cliff would respond with his trademark wit. “You’ll be like Diana Ross in Lady Sings the Blues, with dark sunglasses on in a white bathrobe and a towel around your head,” he joked.

He could always make me laugh, but this time, nothing. The Mack truck–sized depression refused to move. I had become emotionally unglued. I had officially fallen apart. But what I’ve learned on this journey through clinical depression is that my breakdown was actually about me learning how to own my sensitivity and love myself in all of my vulnerability, all my privilege and confusion and loss. This is the story of my mother and the life she dreamed for me. It’s also the story of the dank joylessness I fell into after she died, and how one breath at a time I am finding my way through.


Excerpt. © Reprinted by permission of the author. All rights reserved.


About the Author
Benilde Little  is the bestselling author of the novels Good Hair (selected as one of the ten best books of 1996 by the Los Angeles Times), The Itch, Acting Out, and Who Does She Think She Is? A former reporter for People and senior editor at Essence, she lives in Montclair, New Jersey, with her husband and son. Her daughter is away at college. Follower her on Twitter and Instagram @BenildeLittle and read her blog, Welcome to My Breakdown, at BenildeLittle.Wordpress.com.


Purchase your copy of Welcome to My Breakdown: A Memoir by Benilde Little
https://www.amazon.com/Welcome-My-Breakdown-Benilde-Little/dp/147675196X