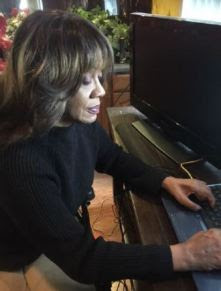 Topic: Walking on Thin Ice: Recovering from a Near Death Experience.

Re'Gena Bell-Roberts discusses her riveting near death story and her pursuit of fame and fortune. Re'Gena shares how she struggled to deal with a life-changing tragedy that threatens her existence and her sanity.

Walking on Thin Ice, a memoir of love, hate, envy, and greed traces a young woman's pursuit of stardom down a dangerous road that leads to shattered dreams and a harrowing fate.

In Walking on Thin Ice, Re'Gena Bell-Roberts shares her riveting story against the backdrop of a childhood sexual molestation to pursue her dreams of fame and fortune while longing for true love.

About the Author
Re'Gena is an actress, poet and an award-winning playwright whose published work includes a collection of prose and poetry. She earned a bachelor's degree in history from the University of California at Los Angeles and raised her four children as a single parent while continuing to pursue a career.

Re'Gena won the Rockefeller Foundation award for her play "Eclipse"; and a Prose award from Culver City Community College. She produced and directed an NAACP Martin Luther King Day celebration event; and received numerous awards for her community service. She was featured on the Steve Harvey Show and honored as one of "Steve Harvey's Hero."  Re'Gena resides in Murrieta, California

Hello everybody. My name is Re’Gena Bell-Roberts and I’m here to share my experience and give some insight on, “How to Triumph Over Tragedy.”

My book, Walking on Thin Ice,” is a story of love, hate, envy and greed and traces a young woman’s pursuit of stardom down a dangerous road that leads to shattered dreams and a harrowing fate.

In writing my memoir, my goal was to tell my story in such a way that young girls today would heed it as a cautionary tale to avoid the pitfalls of falling blindly in love the way I did. Even after realizing my relationship was not in a good place, I continued to ignore the abuse and took chances, which ultimately led to life-changing consequences. But I never imagined such a mind-blowing, heart-breaking outcome.

I’m a survivor of a violent assault, which left me permanently paralyzed. At the time I was a young, single parent raising a set of 2 ½ year old triplets. Anyone who has faced what appears to be an insurmountable challenge knows what it feels like to try to climb out of the abyss, to change your situation and move forward in life ––to become productive and feel whole again.

I’d like to share a few key things with you that worked for me in my circumstance which was:

-Acknowledging- the reality and truth of the relationship and how it changed my life.

-Accepting what was true in that moment, space and time and the role I played in my own destruction, while not allowing it to define me.

-A Shift of attitude – by not feeding into the victim role, and not wallowing in self-pity.  It’s a dark, lonely place.

-Empowering myself through daily prayer.

-Forgiving myself as well as other persons involved.

-Finding purpose and rediscovering my passion for life–– my gifts and talents.

Those elements were the defining actions that helped me conquer my fears, my trials and tribulations.

Steve Harvey once made a statement that resonated with me when he said, “two things come after adversity: a lesson and a blessing.” Well, I have learned a hard lesson from my past and today I’m still counting my blessings.

Listen to a riveting reading from the book: http://www.audioacrobat.com/note/Cwb2FNSk