Pursuing Your Passion, One Sentence at a Time by Sadeqa Johnson 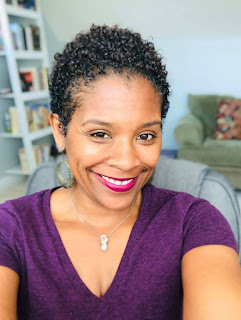 Sadeqa Johnson, a former public relations manager, spent several years working with well-known authors such as JK Rowling, Bebe Moore Campbell, Amy Tan and Bishop TD Jakes before becoming an author herself. Her debut novel, Love in a Carry-on Bag, is the recipient of the 2013 Phillis Wheatley award for Best Fiction.

Sadeqa is the author of Second House From the Corner and And Then There Was Me which were both hailed by Essence magazine. She has received the Black Pearl Magazine Author of the Year award for 2017.

Johnson teaches a writing workshop called Pens Up, Fears Down! in Richmond, VA. She is a motivational speaker, half marathon runner, sometimes yogi, wife and mother of three wonderful children.


Second House From the Corner by Sadeqa Johnson

"A captivating tale to savor about a woman whose buried past threatens her picture perfect family life. Felicia is a wonderfully flawed, compelling main character, one who has stayed with me long after I finished the book. A winning novel from a writer to watch." -Benilde Little, bestselling author

Felicia Lyons, a stressed out stay-at-home mom, struggles to sprint ahead of the demands of motherhood while her husband spends long days at the office. Felicia taps, utters mantra, and breathes her way through most situations, but on some days, like when the children won’t stop screaming her name or arguing over toy trucks and pretzel sticks, she wonders what it would be like to get in her car and drive away.

Then one evening the telephone rings, and in a split second the harried mother’s innocent fantasy becomes a hellish reality. The call pulls her back into a life she’d rather forget. Felicia hasn’t been completely honest about her upbringing, and her deception forces her return to the Philadelphia of her childhood, where she must confront the family demons and long buried secrets she thought she had left behind.

From a phenomenal fresh voice in fiction, comes the compelling story of what happens when the dream falls apart. Sadeqa Johnson's Second House from the Corner is an unforgettable tale of love, loss, rediscovery, and the growing pains of marriage.

Second House From the Corner by Sadeqa Johnson
Listen to an awesome reading from the book:  http://www.audioacrobat.com/note/CwgvrM8k