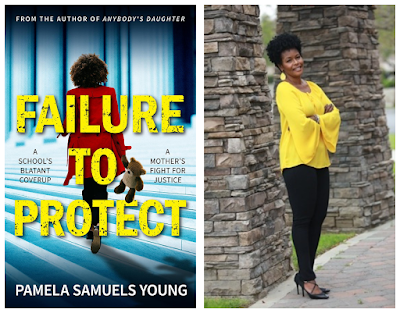 The author of the award-winning thriller Anybody’s Daughter is back with an addictive legal thriller that tackles bullying and its devastating aftermath.
What Really Goes on Behind School Doors?
When the classroom is no longer a safe space for her child, a grieving mother is determined to seek justice for her bullied daughter. Enter hard-charging attorneys Angela Evans and Jenny Ungerman. From the very start, the two lawyers face more than an uphill battle.
An ambitious school principal is far more concerned about protecting her career than getting to the truth. She flat out denies any knowledge of the bullying and prefers to sweep everything under the rug. But just how low will she go?
As the battle enters the courtroom, the attorneys fight hard to expose the truth. But will a massive coverup hinder their quest for justice?

Listen to a reading from Failure to Protect by Pamela Samuels Young
http://www.audioacrobat.com/note/CP7l5vVX

About the Author
Award-winning author and attorney Pamela Samuels Young writes mysteries that matter. Dubbed “John Grisham with a sister’s twist” by one reviewer, Pamela’s fast-paced novels tackle important social issues.
Her most recent legal thriller, Failure to Protect, takes on the bullying epidemic and its devastating aftermath. Pamela won the prestigious NAACP Image Award for Outstanding Fiction for her thriller Anybody’s Daughter, which provides a realistic look inside the world of child sex trafficking. Her courtroom drama Abuse of Discretion centers around a troubling teen sexting case. #Anybody’s Daughter and #Abuse of Discretion are young adult editions of the two books. A young adult version of Failure to Protect goes on sale in December 2019.
Pamela also writes erotically sassy romantic suspense under the pen name Sassy Sinclair. A natural hair enthusiast, Pamela share her own empowering natural hair journey in Kinky Coily: A Natural Hair Resource Guide.
The Compton native is a frequent speaker on the topics of sex trafficking, bullying, online safety, fiction writing, self-empowerment, and pursuing your passion. To invite Pamela to your book club meeting or to read excerpts of her books, visit www.pamelasamuelsyoung.com and www.sassysinclair.com .
Connect with Pamela on Social Media!

Pamela Samuels Young is breaking down barriers with Anybody’s Daughter!

Based on the real-life horrors faced by thousands of girls, award-winning author Pamela Samuels Young takes readers deep inside the disturbing world of child sex trafficking in a fast-paced thriller that educates as much as it entertains

WAKE UP!
"The fact is human trafficking is happening right here, right now, in the United States, probably in any city where anybody lives. Just because you don’t know anything about it doesn’t mean it’s not happening." - Vicki Zito, Mother of Survivor

According to the United Nations, human trafficking is defined as:  Recruitment, transportation, transfer, harboring or receipt of persons, by means of the threat or use of force or other forms of coercion, of abduction, of fraud, of deception, of the abuse of power or of a position of vulnerability or of the giving or receiving of payments or benefits to achieve the consent of a person having control over another person, for the purpose of exploitation

Human Trafficking is Modern Day Slavery:
Human trafficking is also known as modern day slavery. Human trafficking deviates from our historic view of slavery, making it hard to conceptualize. But ultimately,slavery today and 200 years ago share the same notion: It’s the notion that one person’s life, liberty and fortune can be under the absolute control of another, and be sold, bought, or used at the will of the owner.