THE END IS THE BEGINNING
by Shakeim Edmonds 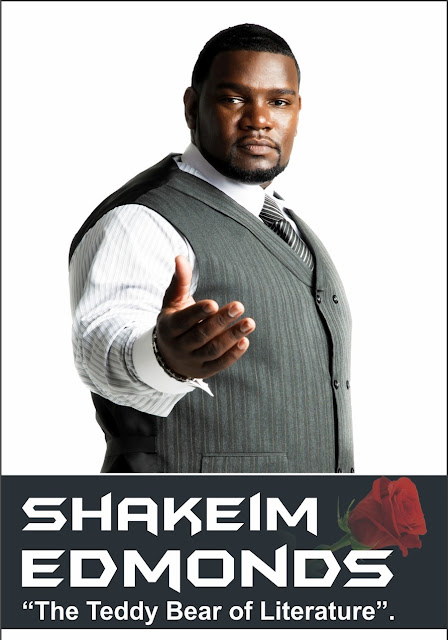 Life’s storms had left him bruised; the waves had thrown him aimlessly into sorrow, grief and bitterness. Failure had become his comfort zone, in his mind obscurity was his terminus, self-disappoint had become his best friend. To Shakeim Edmonds, his life was a turmoil that was destined and inevitable. It was not the life he’d ever imagined but his reality was much more seemingly predestined. His journey was rugged, filled with thorns, booby-trapped with failures, sabotaged with what seemed like infinite letdowns. The pieces of his life appeared more fragile than turning a puzzle upside down before it was completed. Truly his life and his faith were in shambles. He was ready to let go, of the very thing he had the least control over… HIS LIFE.

One day while sitting in the car on a lonely street in his hometown of Elizabeth City, North Carolina… he began contemplating how he could end his life. As tears began to roll down his face he turned on the radio to the local gospel station. He began to listen to the songs and evaluate whether or not they would make good musical selections for his eulogy.

Ultimately, he was ready to die and even until his preparation for death… he was preparing for the sorrow that had become his norm. Each song that played over the half hour or so he’d been listening to on gospel station seemed to be perfect selections. The songs all had somberly rhythms, the lyrics to all the songs were dreary and if one could imagine the most plaintive moment of their life, all the songs he’d heard… were perfect for the occasion to come.

As he reached to press the button in efforts to turn off the radio, another song began to play… one not like the others, a song that instantly paralyzed his thoughts. The first line of the song immediately marinated into his spirit and penetrated deep within his heart. The first lines to the song elevated as he listened with a tentative ear… “This is my season, for grace, for favor”. A chill engulfed his body, the words poured into his spirit and flooded into his loins, the tears he cried flowed from deep within his soul. The tears streamed down his face and dripped into his lap. He cried to the capacity that his eyes burned, became red and swelled partially shut. Burying his head into the steering wheel he continued listening. “Everything is working for my good…” the song continued. Shakeim Edmonds looked up towards the sky and did something he had not done in many years, he prayed.

The singer of the song (Bishop William Murphy) had touched his soul and indirectly saved his life, but it had all been orchestrated by God. The next day Shakeim Edmonds packed up all his personnel belongings and drove to Atlanta,GA, where two days later he joined the dReam Center Church of Atlanta, pastored by the singer of the song that had interceded on the plans he had for taking his life.

What Shakeim Edmonds had declared as his ending, had become his beginning. God didn’t allow his self-proclaimed end for his life to mature because he had a purpose and a life assignment for him to complete. Since that day, Shakeim Edmonds has not struggled with depression nor grief, but has used his experience as a motivating factor to share his story with others around him and people all over the world. His message is clear… “Life will beat you down, but God will elevate you with favor.”

There are so many people who need to hear the message because depression is one of the most complicated sicknesses. Recently, Robin Williams succumbed to his battles with depression but Shakeim Edmonds  has made it his life’s mission that as long as he lives, he will forever share his experiences about his life and spread the word about what God can do when depression, stress and grief have caused you to surrender emotionally, physically and spiritually. Shakeim Edmonds is a living testimony and we as a people have to ensure we do our parts to secure more.


About the Author
Shakeim Edmonds is a North Carolina native, who was born with the gift of unique imagination and perspicacity. Though writing was his natural talent, the genre of romance did not settle upon him until he took the long flight over to the hostile desert sands of Iraq. At a time where turmoil and political strife kept the residue of war echoing in his head, it wasn’t the quarrels of war that broke his will, spirit and ultimately his heart. It was a much greater force … “Love.”

To help heal his emotional wounds, he chose to write about love at its richest intensity. As a result, Shakeim took his personal pain and made it a heart racing, fast paced tale that will have you on an emotional high lavished with steamy encounters and a suspenseful ending. Along with his romantic love stories, Shakeim also writes inspirational blogs and has committed himself to a personal life’s mission of spreading love, joy and happiness.